Old into new: Geneticists track the evolution of parenting

Top Image: A female burying beetle feeds her begging young. The parent and offspring are in a mouse carcass prepared by the parent as food. (Credit: Allen Moore/UGA)

Athens, Ga. - University of Georgia researchers have confirmed that becoming a parent brings about more than just the obvious offspring—it also rewires the parents' brain.

The study, published this month in Nature Communications, finds that the transition from a non-parenting state to a parenting state reflects differences in neuropeptides generally associated with mating, feeding, aggression and increased social tolerance.

Neuropeptides are small proteins that allow neurons in the brain to communicate with each other; they also influence behavior.

The team's research-tested on an insect, the burying beetle Nicrophorus vespilloides-provides a predictive framework for studying the genetics of parenting and social interactions.

The burying beetle is intimately involved in raising its children, including regurgitating food to its begging offspring.

"We tested the idea that we could predict the genetic pathways involved in parenting based on old predictions from ethologists in the 1960s and 1970s," said the study's lead author Allen Moore, Distinguished Research Professor and head of the department of genetics. "When [burying beetle] parents feed their babies, they are feeding others rather than themselves and so genes that influence food-seeking behavior are likely to be involved."

Behavioral scientists predicted that genetic changes occur over time to develop parenting in a species. Based on this hypothesis, Moore's team sequenced and assembled the genome of the burying beetle and measured the abundance of neuropeptides. They theorized that behaviors related to parenting stemmed from alterations in existing genes rather than the evolution of new ones.

By looking at parenting and non-parenting beetles, their tests indicated that neuropeptides changed in abundance during parenting.

The research, Moore said, suggests that many of the genes influencing parenting will be the same across many species. The commonality among organisms will help researchers identify genetic pathways important to parenting.

"It is exciting science when you take a step toward predicting the genetic changes involved in a behavior as complicated as parental care," he said. "And it was pleasing to collaborate with colleagues in genetics and Complex Carbohydrate Research Center, which allowed us to apply techniques that wouldn't otherwise be available to test our ideas."

The study, "Ethological principles predict the neuropeptides co-opted to influence parenting," is available at http://www.nature.com/articles/ncomms14225. 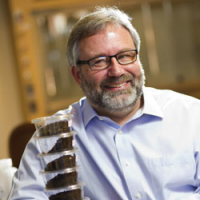