National search underway for next dean of forestry school

Genetics scientist was featured in the Columns:

Senior Vice President for Academic Affairs and Provost Pamela Whitten has appointed a committee to begin a national search to fill the position of dean of the Warnell School of Forestry and Natural Resources.

J. Scott Angle, dean of the College of Agricultural and Environmental ­Sciences, is chair of the search ­committee, which includes faculty, staff, student and alumni representatives.

• Robert Cooper, a professor of wildlife ecology and biometrics in the Warnell School;

• Joe Dahlen, an assistant professor of wood quality in the Warnell School and a faculty member in UGA's Harley Langdale Jr. Center for Forest Business;

• Dan Forster, a Warnell alumnus and director of the Wildlife Resources Division of the Georgia Department of Natural Resources;

• Gary T. Green, an associate ­professor of natural resources recreation and tourism in the Warnell School;

• Sonia Hernandez, an associate ­professor of wildlife disease in the ­Warnell School with a joint ­appointment in the College of Veterinary Medicine's population health ­department;

• Cecil Jennings, head of the ­Georgia Cooperative Fish and Wildlife ­Research Unit and an adjunct professor in the Warnell School;

• Michael Kane, a professor of ­quantitative silviculture and director of UGA's Plantation Management Research Cooperative and its Center for Advanced Forestry Systems;

• Wesley Langdale, a UGA ­alumnus and president of The Langdale ­Company;

• Daniel Markewitz, a professor of soil site productivity in the Warnell School;

• Miles A. "Andy" Stone, a Warnell alumnus and president of Superior Pine Products; and

• C.J. Tsai, a Georgia Research Alliance Eminent Scholar and Haynes Professor in forest biotechnology in the Warnell School with a joint appointment in the Franklin College of Arts and Sciences' genetics department.

The committee will be assisted by the UGA Search Group in Human Resources.

Michael Clutter, who served as dean of the Warnell School since 2007, stepped down Jan. 2 to pursue an ­opportunity in the private sector.

Dale Greene, a professor and associate dean for academic affairs in the Warnell School, is serving as interim dean.

View the complete article by Sam Fahmy in the January 12, 2015 Columns. 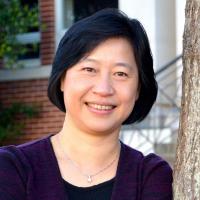